A Parti Colour Poodle, is a poodle that is predominately white (over 50%) broken with irregular patches or spots of a second colour. Writings, drawings, and paintings from the 1700s and 1800s have many examples of the parti coloured poodle. 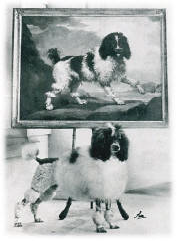 To the right is a picture attributed to George Stubbs (born: 17 August 1724, died: 10 July 1806) showing the Parti poodle was a known breed back in the 18th Century and popular enough to be painted. The dog standing beneath the portrait is Vulcan Champagne Polka Dot, whelped 21 June 1953 showing a documented history of well over 150 years.

We are very fortunate to have Ann Coppage (of Vulcan Kennels) as our advisor in our endeavours to re-introduce the parti poodle to the UK. Ann was one of the last breeders to be associated with the parti coloured poodles which died out in the 1960s and 1970s. An article written by Ann can be found below.

For some unknown reason, around the turn of the 20th Century the parti colour became unfashionable. However, a few breeders like the late Hon. Mrs Ionides and her partner Miss Shirley Walne continued to breed them for sheer pleasure.

Multi-coloured Poodles are currently experiencing a strong comeback in the United States and the rest of the world. Within the past decade, there has been a resurgence of the parti colour Poodle. Partis can be registered with both the American Kennel Club and the United Kennel Club; they may be shown in UKC conformation classes. Other countries are following suit.

Having been asked to write an article on the particolour Poodle, It would be well to begin by explaining what is meant by the term - because the true particolour is by no means a Harlequin. The latter label is used to describe the black and white Great Dane, and its markings in no way resemble the perfect markings of a particolour Poodle.

Look at the photograph of Vulcan Polka Dot standing under the painting - she is almost perfectly marked. Head and ears black with a white blaze (to be critical, she could have more white between the eyes); a black saddle and black over the rump continuing part way down the tail, which ends in a white tip. The docking sometimes had to be done very carefully to enable the white tip to be left. Some marking on the body and legs, but not obtrusively so - and of course, the characteristic spotting of the skin.

"Parti-colour" came to mean "black and white" - although in the early days there were brown and white, blue and white, silver and white, and lemon and white.

The last litter born at Vulcan Kennels to include a particolour was in 1964, from a blue/silver mating. It contained two - one dog and one bitch. The dog is now dead, but the bitch is still going strong and is a blue and white particolour.

Many of the early prints depicting Poodles show them as particolour and having descended from the "Waterdogge" the truffle hunters. In Hutchinson's Dog Encyclopedia there is a reference to the Truffle Poodle and a letter is quoted from Miss Jane Lane of the famous Nunsoe Kennels which relates that a friend of hers in Scotland had some interesting photographs with particulars of the old original Truffle Poodle.

Apparently these dogs were imported into England at the end of the nineteenth century. The photos (alas, none were reproduced) showed white Poodles with black spots on the body.

Miss Lane's friend showed the particolours on more than one occasion with great success. Special classes were out on fro them, and they were in great demand. Their owner was just getting them established when the war came and he was unable to keep on with his breeding and importing.

The dogs were medium-sized and in colour black and white, brown and white, and - very rarely - lemon and white. They were remarkable for their tremendous coats of exceptionally harsh texture. Miss Lane saw a photo in an old book of these black and white Poodles hunting truffles, aided by a Dachshund-type dog. The Poodles found the truffles and the Dachshund dug them up.

That particolours were accepted for exhibition in the early days is borne out by a reference in one of my books called Dog Shows and Doggy People, published in 1902. The author writes about the Curly Poodle (the other writes about Corded Poodles) and how the colours have been extended. When he first judged the breed, white was the prevailing colour whereas now there were black, black and white, blue, blue and white, grey, fawn, brown and red-coloured specimens.

There is an excellent illustration in William Youatt's book The Dog, published in 1854, showing the Poodle as a curly, unclipped animal with black patches very similar arranged to those of Polka's. No colours mentioned in the text.

The late Hon. Mrs Londies had a very soft spot for the particolour - even to the extent of having a flock of the black and white Jacobs sheep at Buxted Park!

Miss Jane Lane bred many particolours, and as most of the Vulcan champagnes were descended from Nunsoe lines, the particolour blood was strong at the Vulcan Kennels. With many breeders ashamed to admit that their dogs and bitches threw these attractive Poodles, many pups must have been put down at birth. The ignorant novice breeder and owner were told that only solid colours were permissible and that the particolour was a mismark - a totally untrue statement - a mismarked Poodle being any solid colour with touches of white - eg. white toes, a white spot on the front, etc. Thus sadly, the particolour Poodle was ostracized, except for those few breeders like Mrs Lonides and her partner Miss Shirley Walne, who continued to breed them for sheer pleasure.

The character of the particolours was always unique; somehow they had an extra dimension - just that bit more clever, amusing or intelligent than their solid-colour littermates. Naturally enough, it was always they which caught the eye of prospective purchasers - and often there was a waiting list for the next ones expected in a litter.

Miss Walne remembers one complete particolour litter, all perfectly marked, and about ten in number. She had a photograph which was loaned to someone - and sadly, never returned. This litter was of Nunsoe breeding and one of the dogs is the sixth generation of my Champion Vulcan Champagne Damassin who was white herself when put to white males - and unfortunately failed to conceive to Ch. Vulcan Champagne Taffy who was black and did sire particolours.

Various colours at Vulcan carried the genes for reproducing these attractive dogs: a string line through Champion Vulcan Champagne Woper, who was black; Vulcan Adolphus of Burgois sired several to white bitches, and a male silver, Vulcan Champagne Amorist. All these dogs can be traced back to the white import Duc de la Terasse of Blakeen, and Nunsoe Why Not - a particolour - was the product of two particolours, Nunsoe the Bawbee and Nunsoe Oo'er.

Nunsoe the Bawbee was sired by the Duc out of a blue, Nunsoe the Ha'penny, who had a white cross on her chest. Nunsoe Oo'er was by Phidgity Martin of Gunthorpe, a white - out of a bitch Nunsoe A l Parisienne, who was herself a daughter of the Duc. So you can see a very strong influence there!

I should be very interested to know if the Duc ever sired particolours in America - and find it quite fascinating to speculate why it should have come out so strongly from mating him to English-bred bitches, when he was white-bred for generations back. The German whites usually had spotted skin - in fact Miss Walne tells me that was indeed the correct pigment until someone produced a white Poodle with a silver skin and gradually, as so often happens, this became more fashionable and desirable - until the spotted skin became looked upon as ugly and wrong.

Take a look at Polka's pedigree and we will concentrate on the 4th generation, and for argument sake see how many of these dogs go back to the Duc, and how far back he appears.

Berkham Hansel of Rettats was the great-grandson of the Duc. Quality of Piperscroft was all English-bred; Vulcan Champagne Pommery looks to be all English-bred until we find five generations back that he has German breeding from the Konigstuhl and Lennep lines - which are also behind Duc. 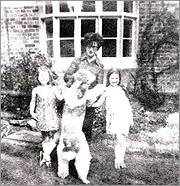 Polka had only two litters - the first by Vulcan Champagne Stefan (a Wopper grandson, Wopper himself being a grandson of Berkham Hansel), in which there were six puppies.Five were particolours (black and white), the sixth was black.

Her second litter - if it can be called that - consisted of one bitch puppy... black! Her father was Ch. Vulcan Champagne Taffy, who as mentioned before had sired partis. At the time, Polka was eight years old; if mated a couple of years earlier, perhaps a large litter would have resulted - including some particolours.

I really don't know whether anyone could now deliberately set out to breed particolours. It is a faint possibility, but would probably take more time, money and dedication than most people have to spare.

Also, our bloodline has become further diluted over the last decade which has introduced a considerable amount of American and Canadian breeding into practically every kennel. To be truthful too, I don't think many of the present-day breeders would know what to look for in a particolour, and have been so conditioned to abhor mismarked Poodles that they'd find it hard to accept a two-colour dog. Mrs Lonides caused quite a furor when she exhibited two particolours - I believe they were Polka Dot and her brother Vulcan Dot and Carrie - at a Club show, even though they were entered Not for Competition!

There is no space here for more pedigrees of the numerous particolour Poodles in the Vulcan archives, but if anyone wants further information or pedigrees traced back, I should be only too happy to help if I can. 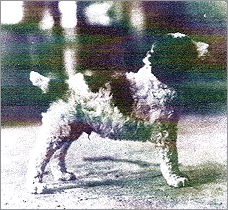 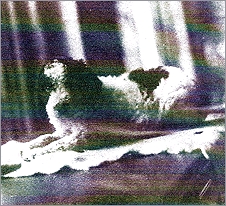 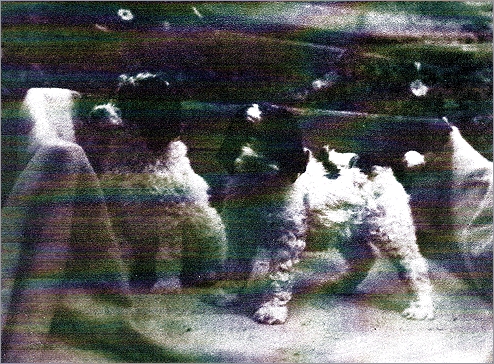 VULCAN POLKA DOT and VULCAN DOT AND CARRIE at about nine weeks of age.
Back to Top